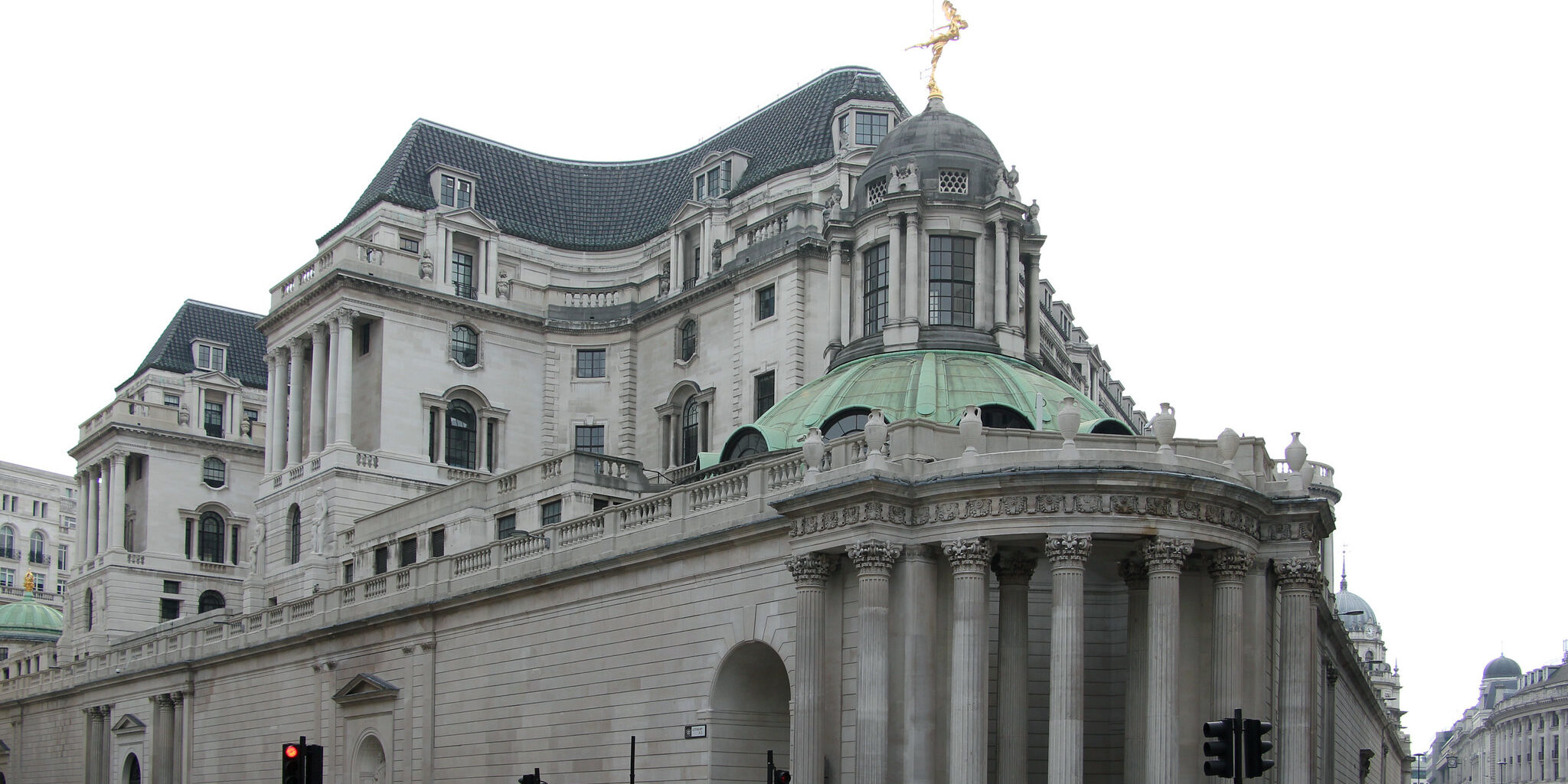 Comments Off on Financing abolition

The debate about the appropriate way to handle the 19th century compensation of slave-owners is likely to rumble on for a while, so I thought it would be useful to put together a quick post pulling together the main facts in the debate: how much was paid to end slavery, when it was paid, who it was paid by, why it was paid, and some of the consequences of these payments.

One of the first things brought up in this sort of conversation is that Britain didn’t finish paying off the debt from compensating slave-owners until 2015. This is one of those things that’s based in truth but abstracts away from quite a lot of complexity.

The money that financed the abolition of slavery was initially borrowed in 1835 (1). These bonds sat in the national debt until 1927, when the government decided to refinance. This process involved buying out old bonds and issuing new ones, which were undated. An undated bond is pretty much what it sounds like: the government makes an interest payment each year until it decides to pay back the sum borrowed (redeem the debt), but has no obligation to actually redeem it on any particular date.

We can however be pretty sure that we weren’t still compensating the descendants of slave-owners. This is partly because bonds can be bought and sold and 180 years is a long time, but mostly because the interest payments on the debt by definition were made (originally) to the people who lent the sum rather than the people who received it. In other words, we would have been paying the descendents of the people who funded abolition (2).

The long duration of repayment wasn’t because the sums involved were so vast. The government didn’t pay off these bonds until 2015 because it wasn’t worth doing. From a net present value standpoint, the payments on these bonds were low relative to current interest rates. When that changed, the government redeemed the bonds, financing this as part of the usual debt sales programme (3).

It’s worth digging into this a little because it’s often used as a rhetorical device in arguments about the degree to which British wealth rests upon slavery (see my Spectator article for a general rebuttal), and in calls for reparations. Understanding the actual numbers involved is useful for keeping these debates grounded in a degree of reality.

There are two sets of numbers usually used to explain why the debt took so long to pay off. The first is the share of the government budget, generally stated that the bill for abolition came to 40% of government spending in 1833. As far as I can tell this is a misconception; the abolition act was passed in 1833, but the loan organised by Nathaniel Rothschild and Moses Montefiore which financed the compensation of slave-owners wasn’t finalised until 1835, with payments beginning in September of that year. In that year, £20 million is equivalent to ~30% of the budget.

It’s also important to understand what this meant in practical terms. At that point in history, the purpose of the budget was to either fund your latest war against France, or pay off the debts from the last one. When you aren’t spending much, any lump sum is a larger share of the total (4).

The graph below shows what proportion of government spending abolition (valued at an addition of £20 million to that year’s spend) would have constituted in each year from 1800 to January of 1854, compared with spending on servicing the government debt. (5). 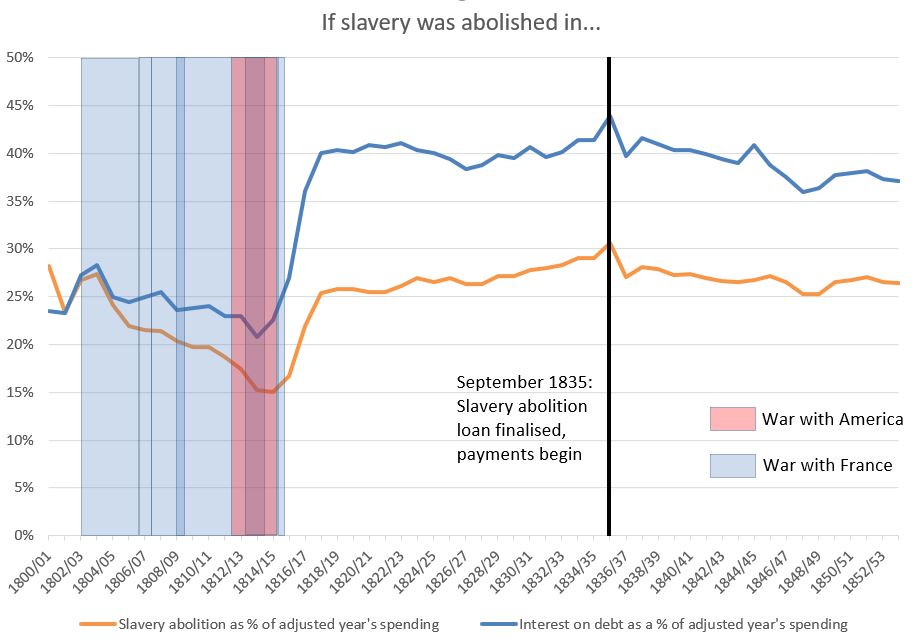 In cash terms, the sums sound quite large. Prices are ~100 times higher now than they were then, so £20 million in 1835 is worth about £2.5 billion today. Unsurprisingly, people receiving this money invested it and a number of businesses can trace back a line to at least some of the compensation bill. Describing this as a transfer of wealth from the Caribbean to Britain as some have done is a misconception; this was the use of funds raised inside the United Kingdom to effectively buy the liberty of slaves overseas, an internal reallocation rather than an extraction from one region to another. In turn, arguing that compensation payments were a way in which slavery contributed to development is also based on a misunderstanding. Public debt was raised to make these payments,  squeezing out other economic activity (6).

Another figure used from time to time is £20 billion. The earliest variant of this figure I can find is a 2013 reference to a UCL study reaching £16.5 billion, and this includes the interesting term ‘wage values’. If you inflate this figure with the Bank of England’s Composite Average Weekly Earnings series, you’ll reach figures of a similar size.

The problem with this is it’s not really the correct concept. The idea of adjusting for inflation is to give a sum in terms of a constant amount of spending power; £20 million in 1835 buys you £2.5 billion worth of goods today. If you adjust for wages, you’re building in productivity growth. You’re asking something closer to “what would the amount of work needed to earn £20 million in 1835 earn today”, which isn’t quite as useful (7).

Regardless, £2 billion is a lot of money. It’s still a number that needs some context; it’s equivalent to 0.3% of government spending this year, or somewhere in the region of 4% of the final cost of High Speed 2 (£65 billion). Modern government involves large numbers because the economy is so much larger.

It’s worth mentioning at least in passing how this bill was reached. Going back through the records of the debate, there are a number of biting criticisms levelled by abolitionists at the ‘West India interest’, effectively implying that the compensation is far above the income actually lost. It is also worth remembering that the country as a whole generously subsidised these plantations into profitability, leading Adam Smith to describe the colonies as being “to the great body of the people, mere loss instead of profit” — a view later confirmed by economic historians (8).

And this is where we really reach the crux of the matter; whether Britain should have compensated slaveholders. This is not a question about the moral principle of abolishing the institution of slavery, which is entirely clear, but how politicians went about doing it.

Let’s say you’re an abolitionist in Parliament in 1833. Last year the Reform Act finally weakened the West Indian lobby to the point where abolition may now be plausible. Against you, you have a large vested interest that wishes to maintain slavery. As a measure of the political power of the ‘Sugar Interest‘, remember that the viability of the plantations effectively rested on heavy government subsidies in the form of tariffs on competitors, administration, and military protection.

While you feel that “if any persons are entitled to compensation, it is the slaves themselves”, you also know that compensation will probably be a necessary evil if emancipation is to be won; you need the West India lobby to concede, and the Caribbean to comply. The conclusion the abolitionists reached (9) was that this was worth it, even though they may strongly oppose the principle (10). It may even be the case that you have to concede ‘compensation’ far above the actual value of the plantations, and the continuation of forced labour under an ‘apprenticeship’ (11)

None of these things please you. You view them as morally abominable. You speak out against them, but it is also clear that this is the price of compromise in order to abolish slavery today.

Do you take this less than perfect abolition after 18 years of work, or do you keep up the fight until a total victory can be found?

Looking back from the comfort of the 21st century, it’s easy to say that no compensation should have been made; instead of paying, we should simply have mandated release. But that was not the choice that was offered; the question is not “did slave-owners deserve compensation” so much as  “should the abolition movement have waited until a complete victory was available”. To me, the answer is very clearly ‘no’ to both (12).

Conflating these questions may partly be why recent journalism has tended to reject nuance. The criticism of the “whiff of self-congratulation” around British slavery is in a way its own national myth, particularly when it focuses on the outrage of “government bailouts” for slave-owners. The option of waiting was there, but the people of the country were willing to pay in order to get abolition done; to wish that things had been otherwise is almost to indicate a preference for a more extended period of suffering so that we can feel better about the moral purity of the way slavery ended.

And here perhaps it’s worth dwelling for a moment on the contribution of the British public to abolition. The profitability of the colonies in the first place was maintained by placing upon the taxpayer the burden of tariffs, defence, and administration necessary to make the plantations viable. When the time came to abolish them, the taxpayer paid again. At that point in time, the government budget was financed largely through indirect taxation (13), which in turn fell disproportionately on the poorer members of society. In other words, the wealthy benefited from slavery, received compensation for its abolition, and throughout it all the poor paid (14).

Image courtesy of Can Pac Swire, used under a Creative Commons Licence.